A team of ‘Haagse Dingen’ passed by on the 24th of May for a video-report of the Open day.

On Saturday the 6th of September I exposed my felt, wearable hats for the winterseason. In many colours, as always. Together with four other hatdesigners we filled the stands on and around the Hoytemasquare in The Hague. The shopassociation district Benoordenhout facilitated for the third year the hatdesigners. The fashionhouse of Jaap Rijnbende on the Breitnerlaan had hired models from the Maximore Models Agency to show the creations from his autumn collection. They appeared regularly  in the street. For a hat to go with the outfit, they served themselves everytime by choosing a matching hat of one designer. The shopping crowd was happily surprised about so much design and colour. Three musicians, Trio Grande, chose their hats of my stand and now also looked Grande themselves. 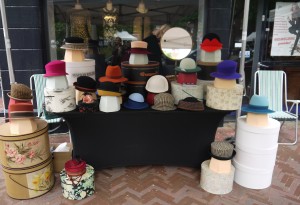 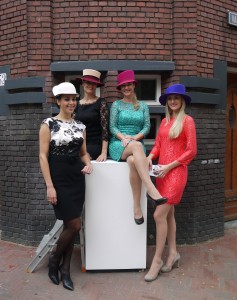 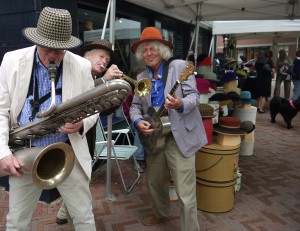 Start of the Theatre-season in The Hague 2014

On Sunday the 7the of September my stand was found on The Lange Voorhout, with hats and clothes. For advertising my courses in both disciplines. The hats were tried on frequently and the clothes studied in detail. [photographs by Piet Vernimmen] 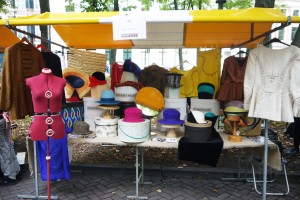 On The Lange Voorhout 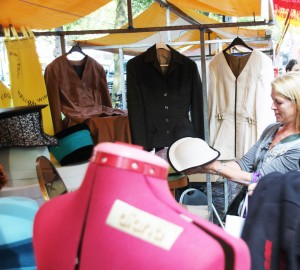 Shall I try it on? 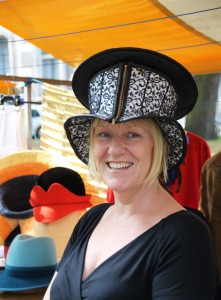 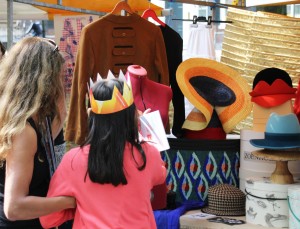 Time for a real hat? 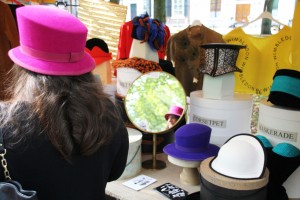 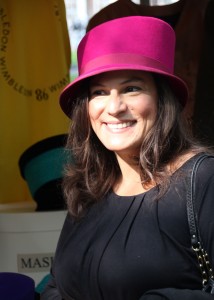 And now from the front … 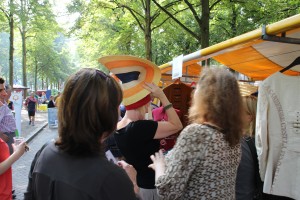 A hatmarket on Saturday the 13th of September, just before the Third Tuesday of that month [opening of the Parliament season where female politicians wear hats], is obvious. On the majestic avenue The Lange Voorhout, in front of the Esher Museum in The (former) Palace, is of course the most beautiful location for it. That is why the hatmarket was present again this year on the Princesfestival. Hatdesigners and related businesses filled the 40 stands. A Hatwalk provided the moving image of the hats. A lot of extra visitors came for the rehearsal of the honourable horse-escort from the Royal Militairy Police for the Golden Carriage [in which the King and Queen travel from the Palace Noordeinde to the House of Parliament on the third Tuesday of September]. I could fill my stand even more because of the greater proportions and could therefore show more ideas for the winterseason, and more wearable felt. The day was lit up by a warm autumnsun. 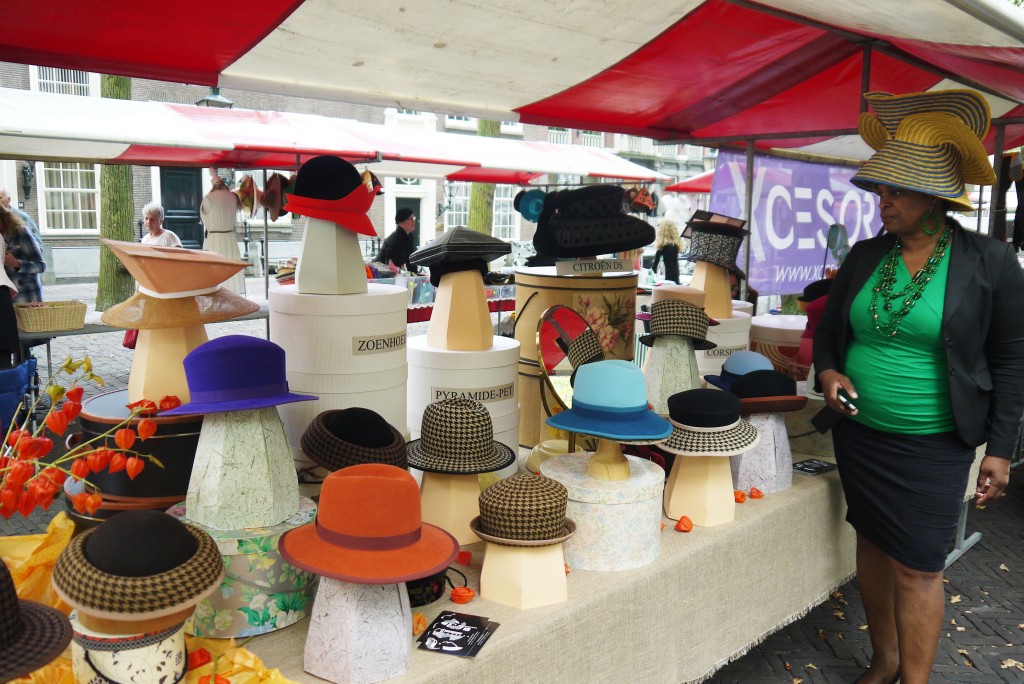 The first customer tries on a suitable hat. 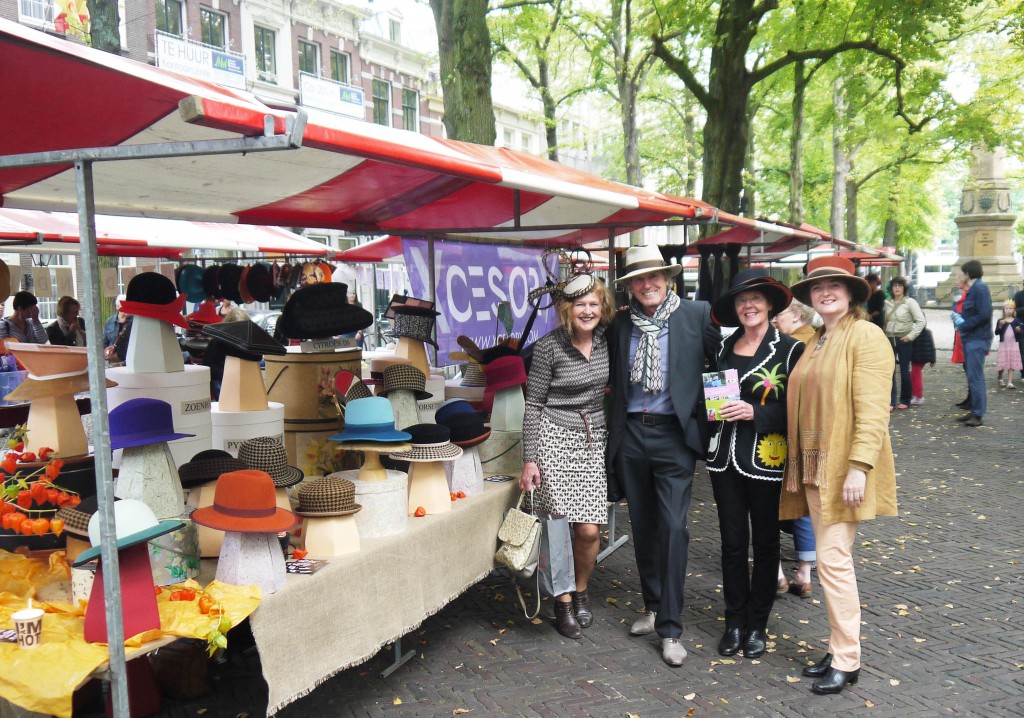 On the left Truus Stuiver of hatshop Capello in Nijmegen 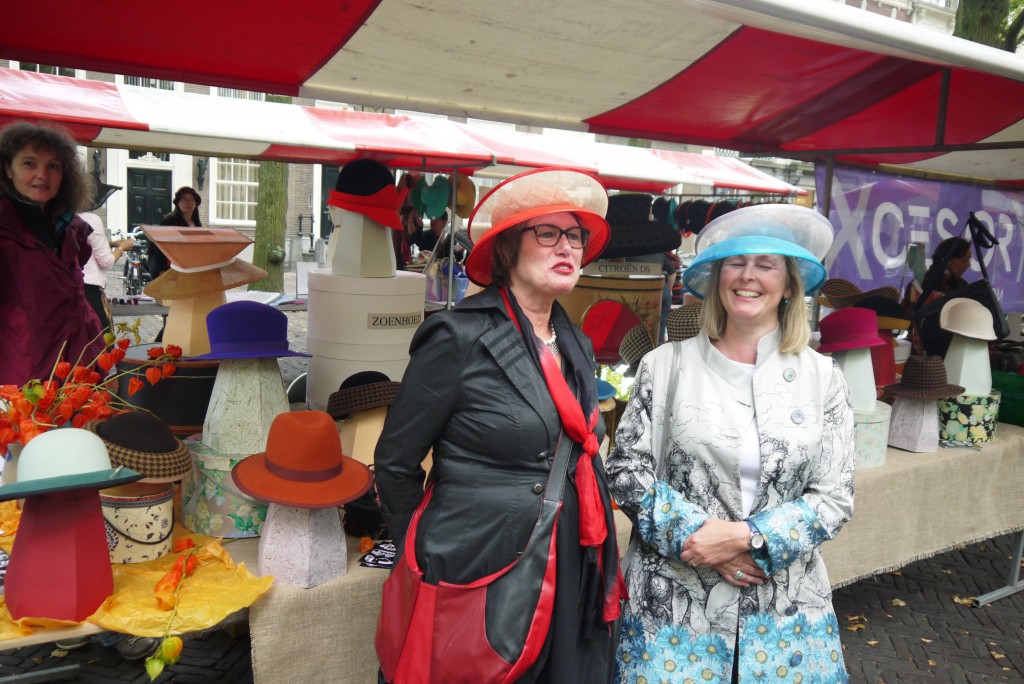 Coincidental meeting between 2 hats, made by the 2 owners 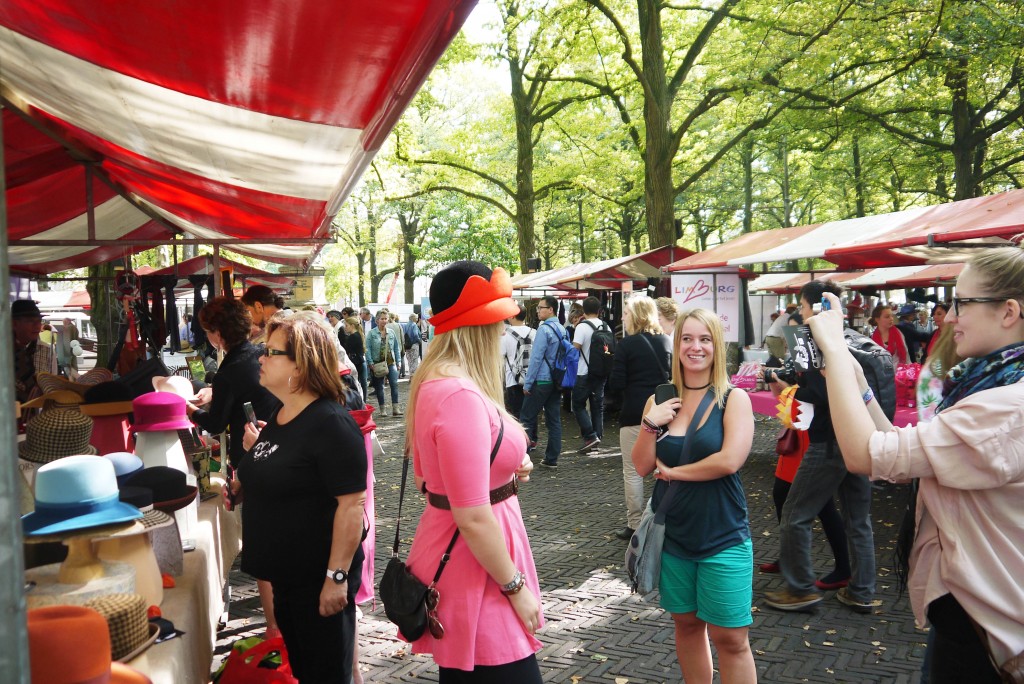 The Kisshat always brings a smile around the lips. 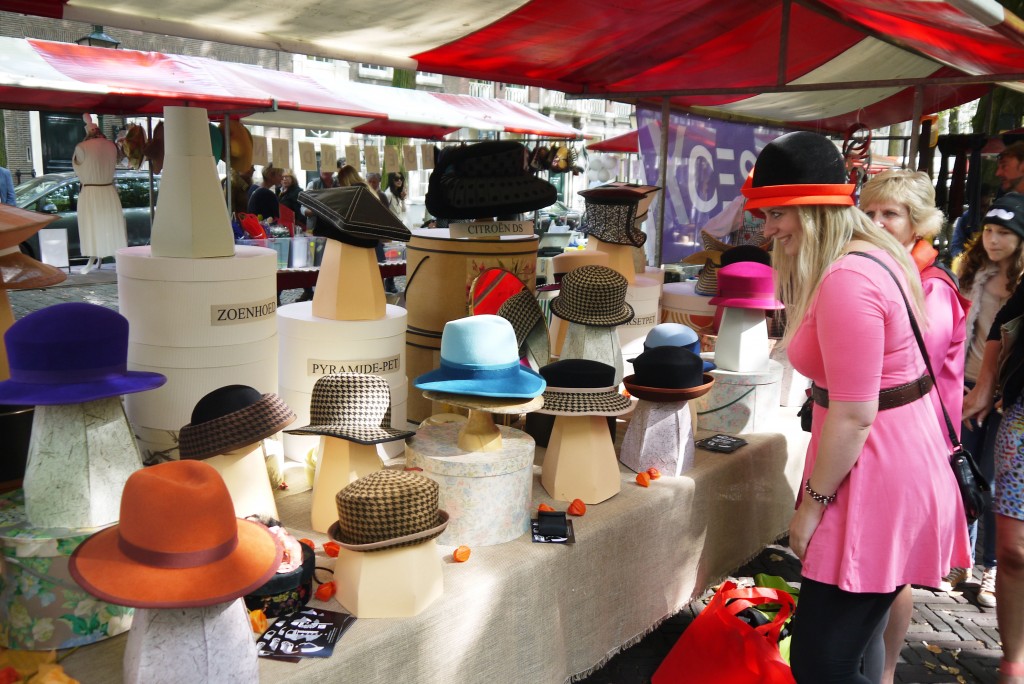 Now the other side, without lips 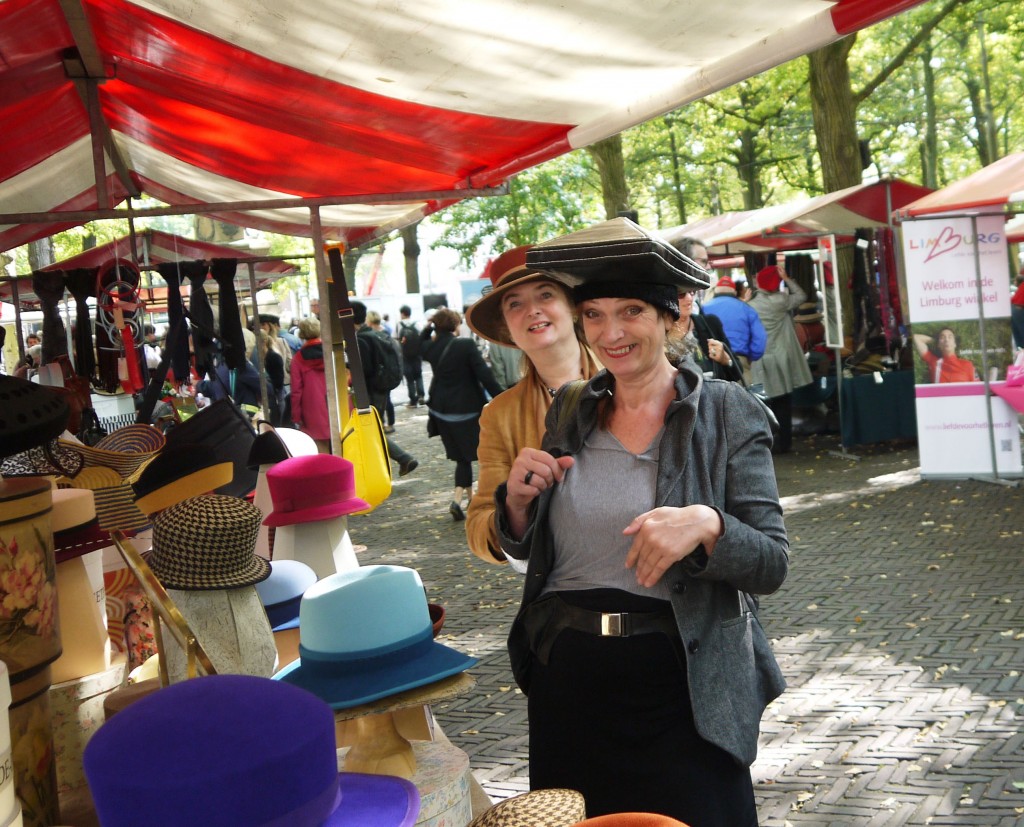 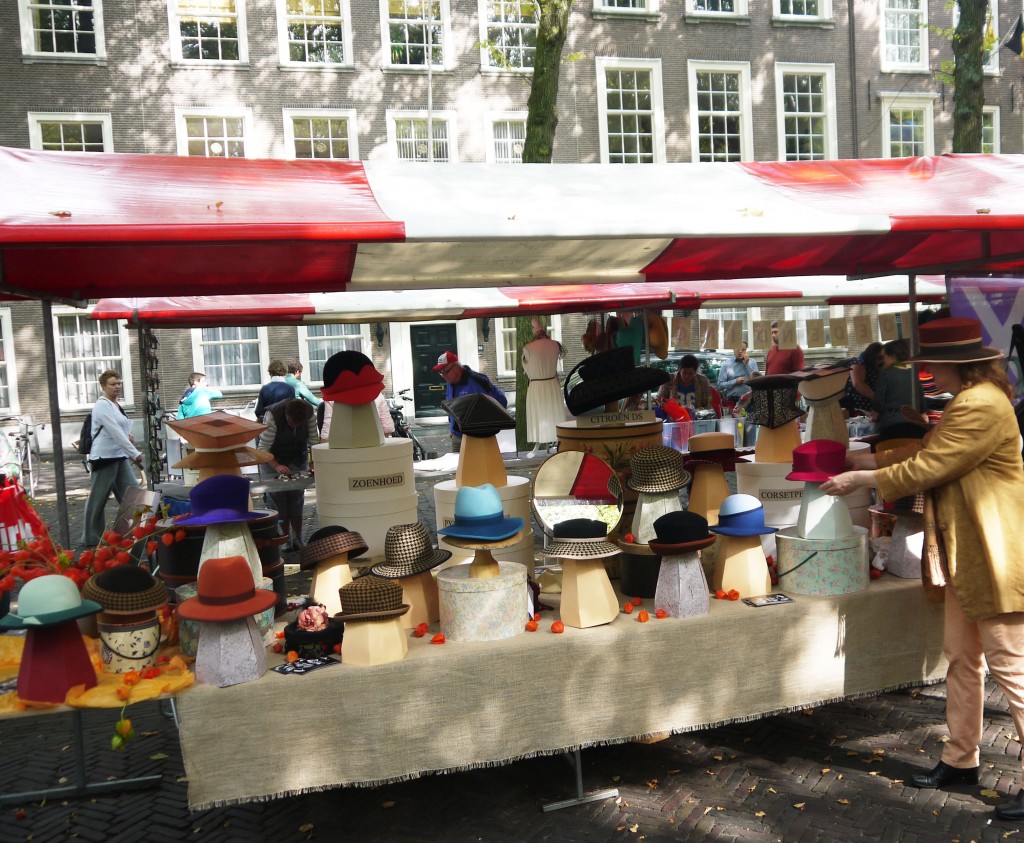 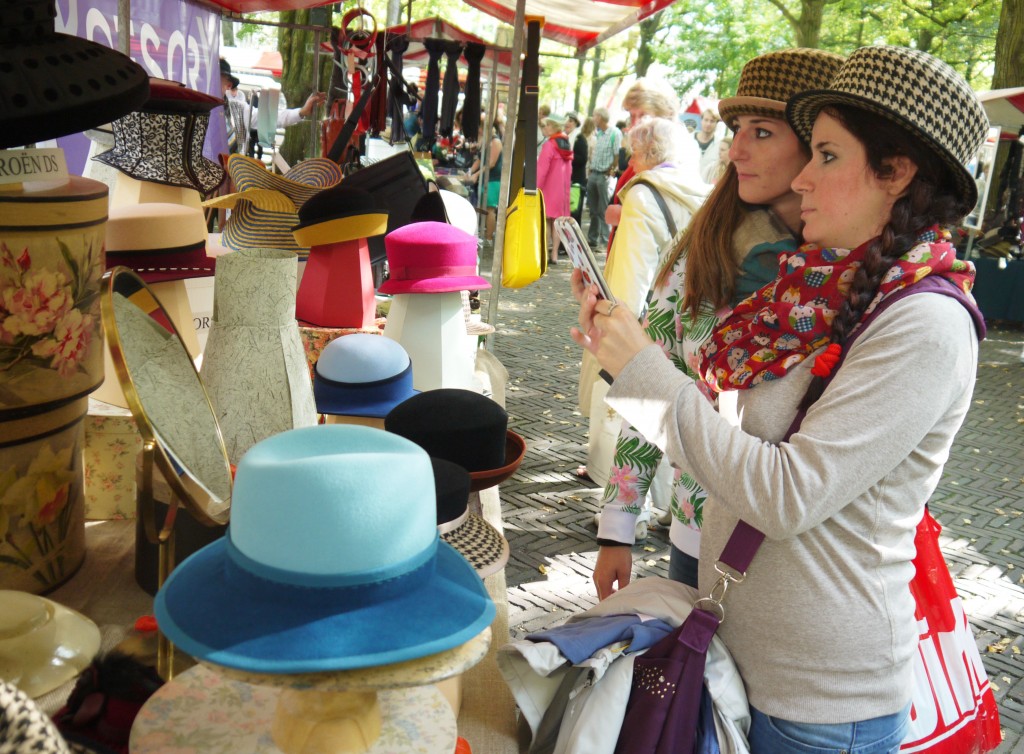 Which hat shall we take a photograph of? The CitroënDS? 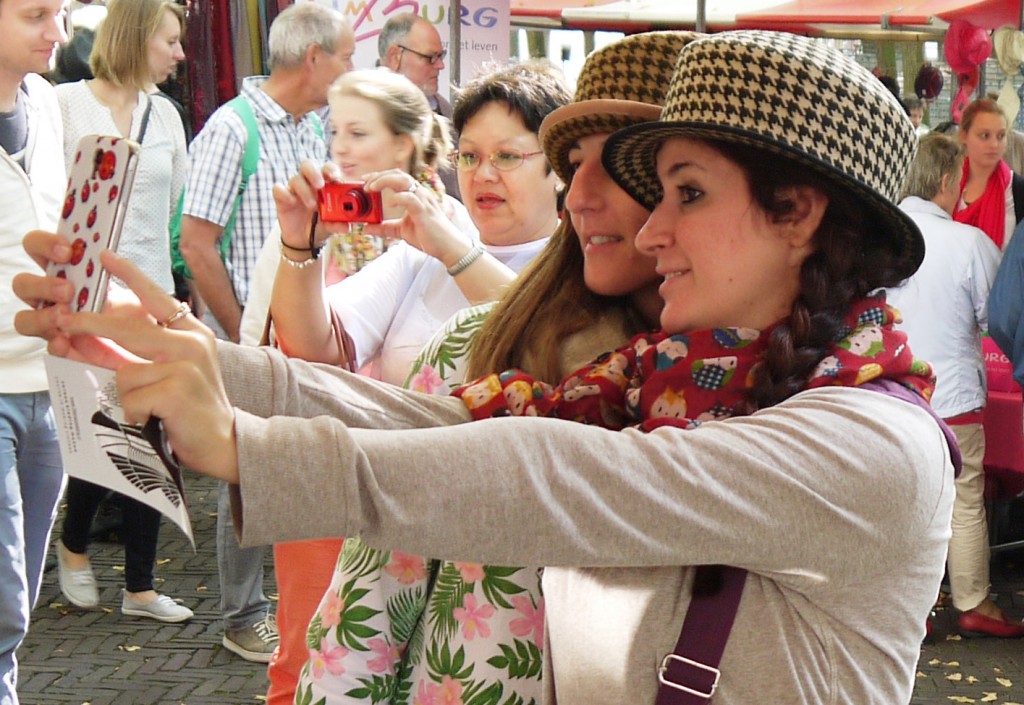 Now a photo of ourselfie 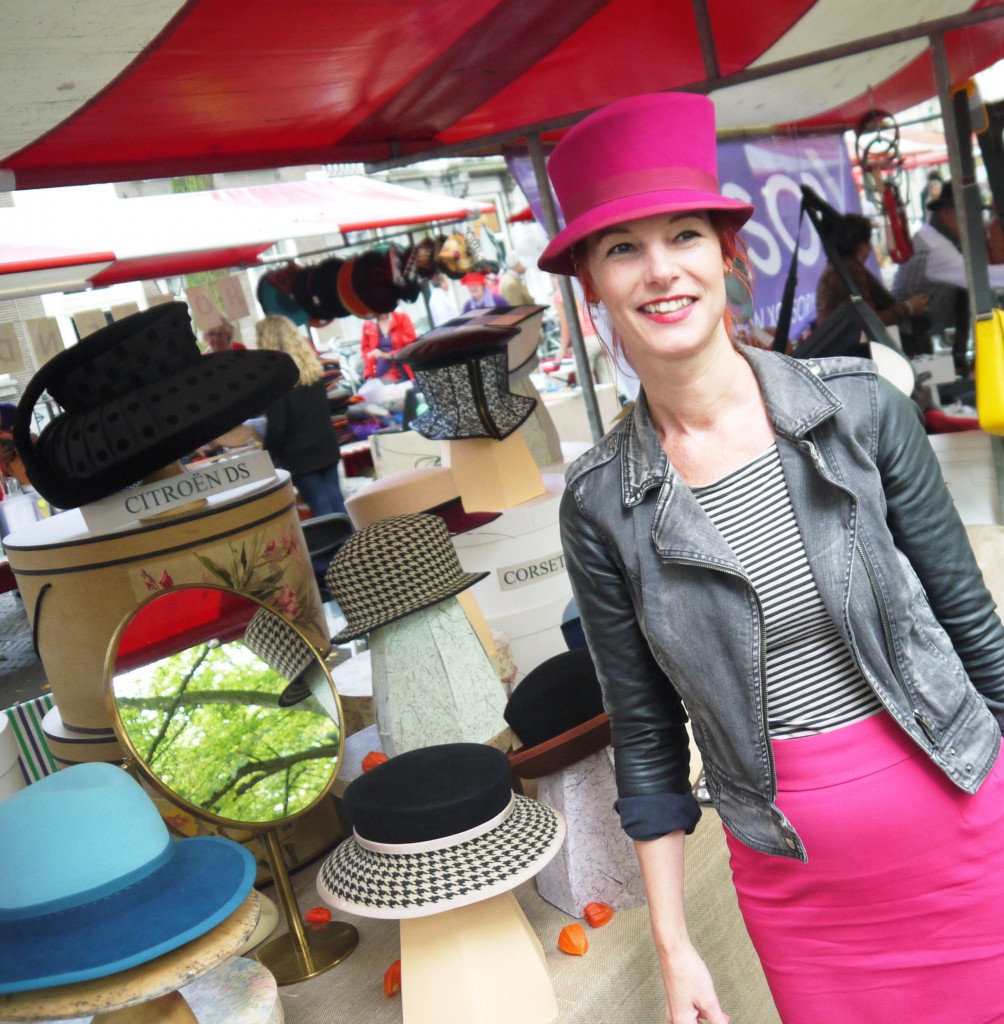 I put on the right colour skirt this morning. 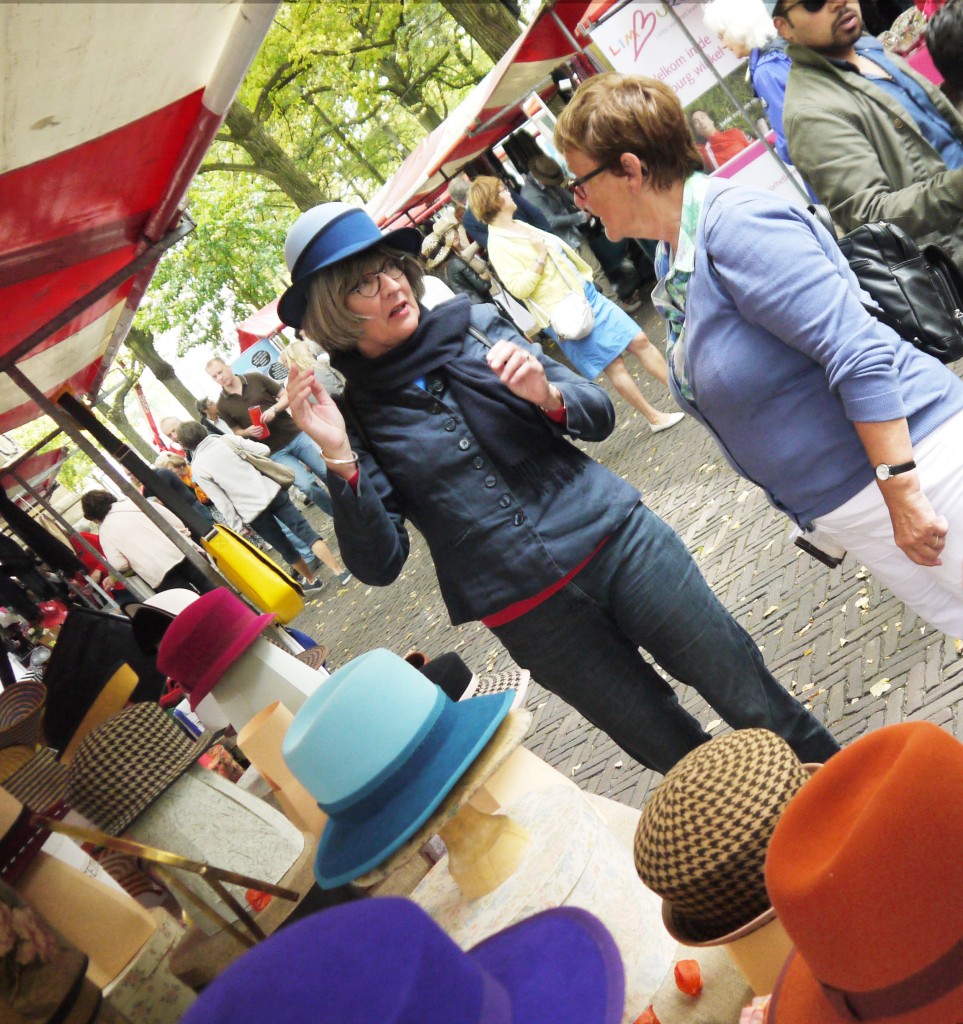 Blue is my colour, isn’t it? 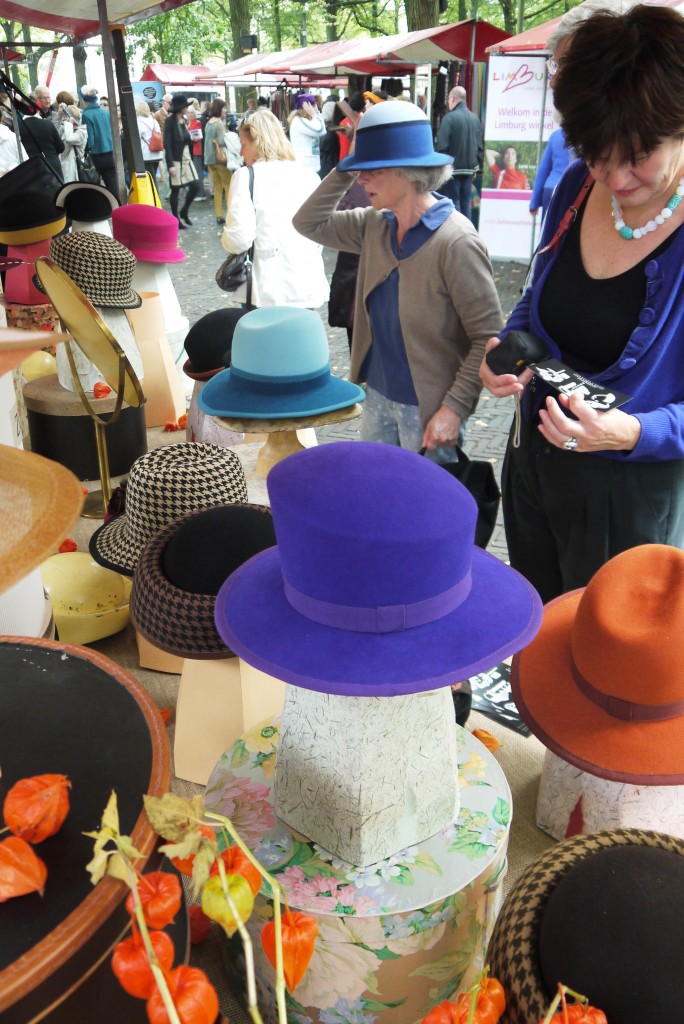 Three colours blue, including the ribbon on the edges 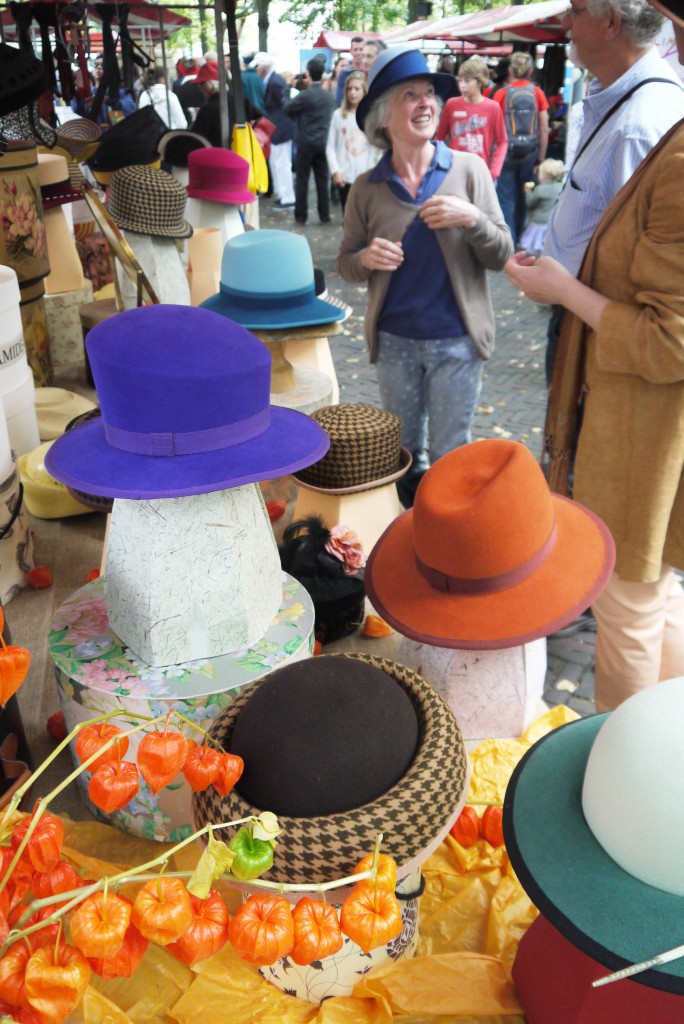 Tell me, would you still walk beside me with this hat on? 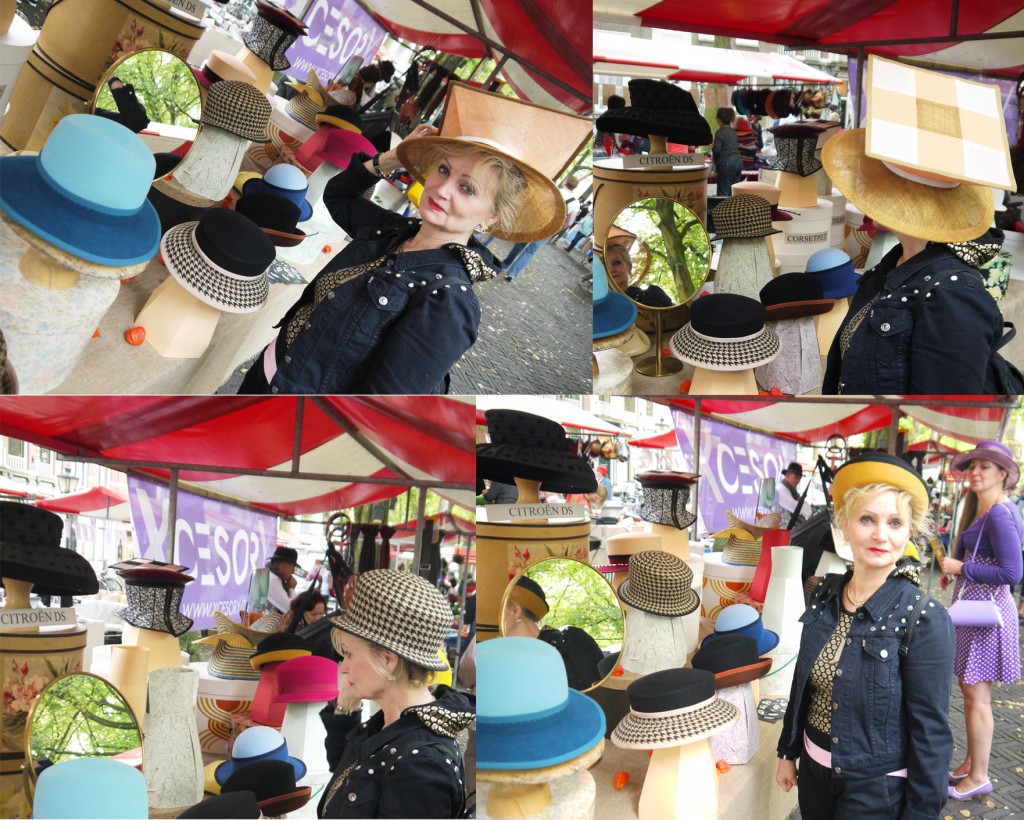 Ideal such a head for hats 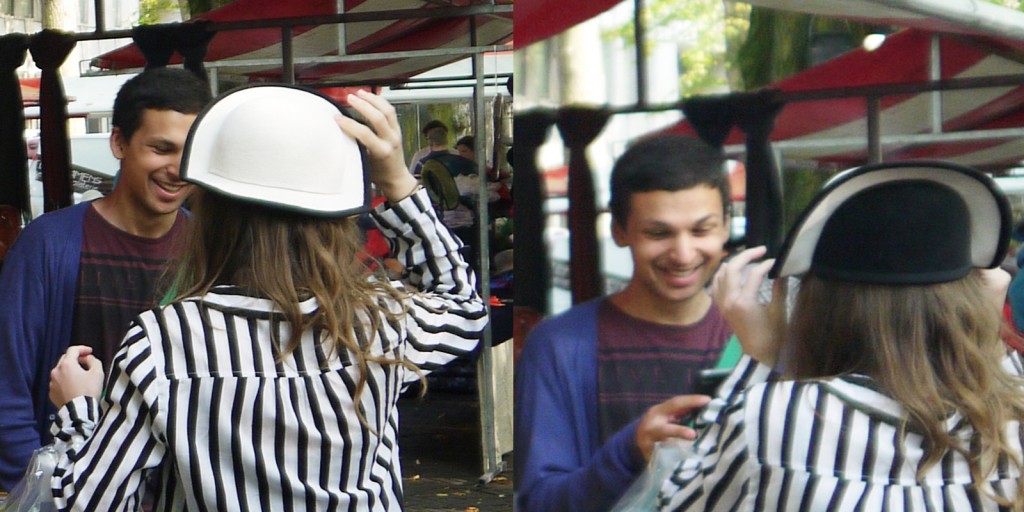 First the front of the hat seen from behind and then the back of the hat where it belongs. 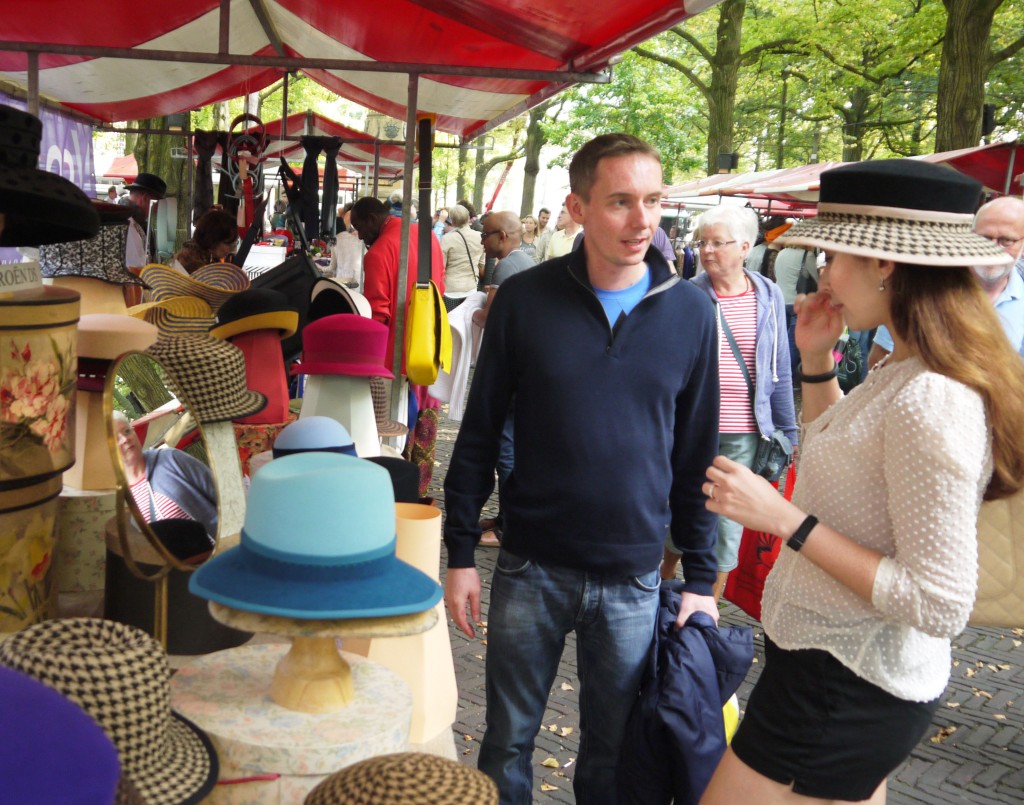 Classy that is! Shall we look for a Chanel-suit right away?

Fitting colour orange for this day. The hats are less amused by the colour.

But we found a solution for this. 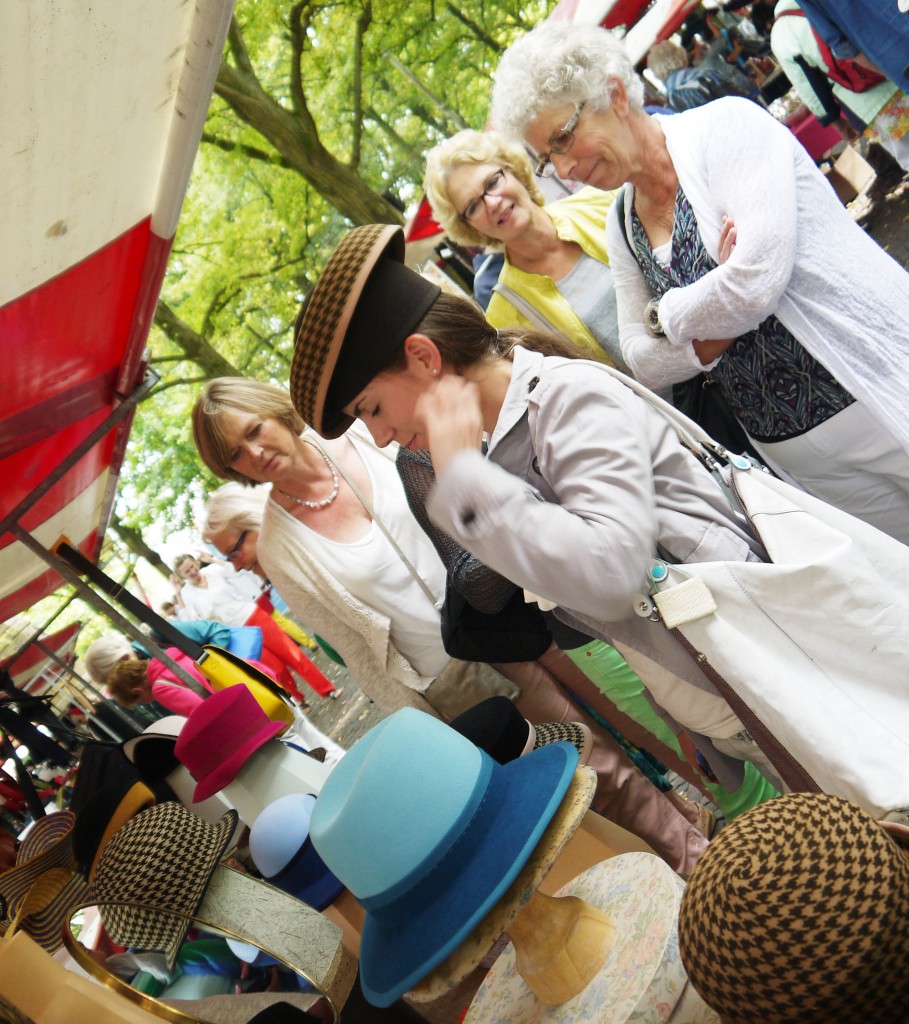 A hat with a loose brim to be put on any direction you like. 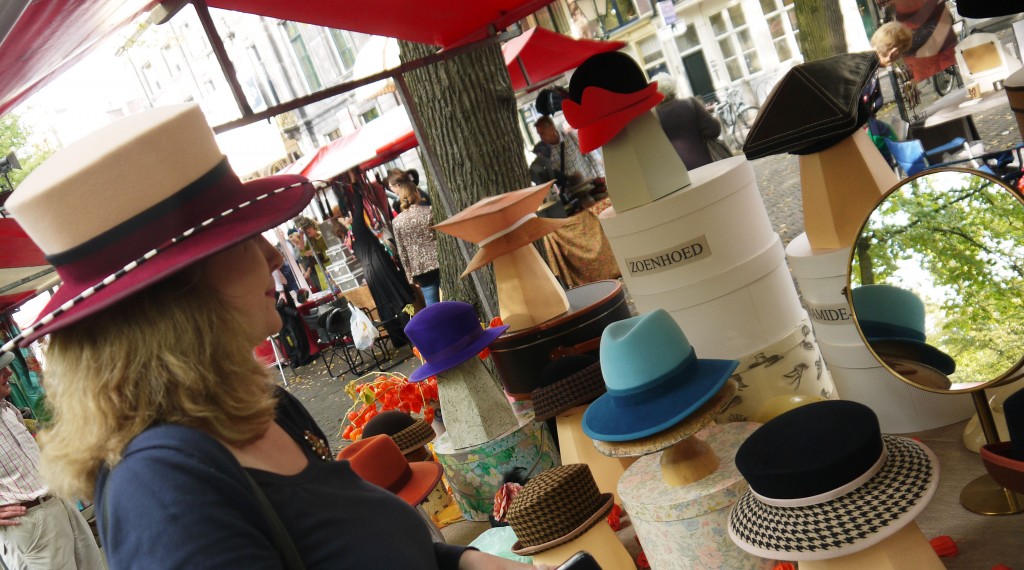